Post storm funk. Poor conditions; lumpy, bumpy storm surf. Waist to shoulder high with an occasional shoulder to hop on. Poor to fair shape Easterly breeze. One guy out, parking lot is deserted.
Me, I'm heading off to my woodworking class at Palomar College.

Wait and wait some more

Swell has dropped off considerably. And it's very inconsistent. Clean conditions, good tide, waist to chest high sets. Kinda crowded; 20+ out now and the surf PE class has not arrived! Fair shape.

Low tide closeout sets with crumbly in-between waves. Good conditions, slight surface texture with the wind chill provided by light offshore breezes. Waist high. Maybe larger on the sets. 8 out. Looks and acts like leftovers. With some tide and sun, this will be a longboard cruisin' session.

Shoulder to head high but the swell direction has it pretty walled up. There are some corners but you have to be patient and in the right spot to get one. If you do connect and make it around the sections, there are some nice inside bowls. Low tide, good conditions, 20 out. Rights seem to be better than the lefts. Long lulls and not much to ride between sets.

Ian just pulled up and is going out. Reported that Baja was really good this past weekend. Double overhead at K38 and according to Ian "the best I've ever seen/surfed at K38".

Looks like we are in for another great SoCal day. 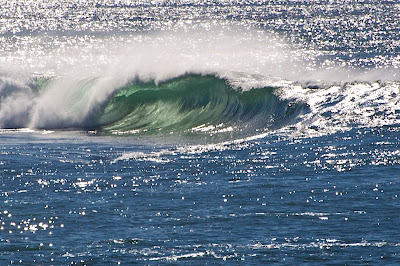 After a really great surf session at Terra Mar with the boyz this morning (head high, perfect conditions, no crowd; Terra Mar was doing it's thing!) decided that some of the La Jolla reefs deserved a look see.  The Santa Ana's were really kicking up and it was 76 degrees when we pulled into (finally) a parking space near Children's Pool.  The crush of humanity was unbelievable but heading south on Coast Blvd most of that was soon left behind.  The swell size and direction, the howling offshores, and the tide was just what the La Jolla reefs needed to spring into life.  Nearer shore, the skim boarding community was having a great time and putting down some great moves.  All in all, a great day from start to finish.
Have a good day
Aloha
Gary
All photos copyright Gary Erbeck
Posted by Gary at 8:19 PM 1 comment:

It was big this morning.  Not out of control big, but big enough that everyone got their clock cleaned by at least one sneaker set.  It was head high and the big sets were 2-3 feet over that.  Long lulls seduced a few into the line up who had no business there but momma O knew who they were and bitch slapped them around a little bit; one went over the falls backwards (holding on to their board the entire time) but most just got thumped really really hard in the impact zone.  Here are some photos from the morning go out.  Supposed to be larger tomorrow. 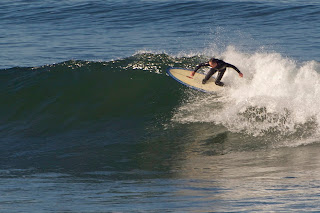 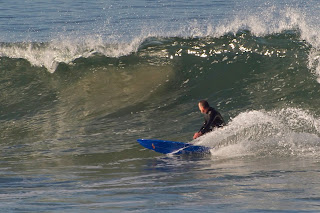 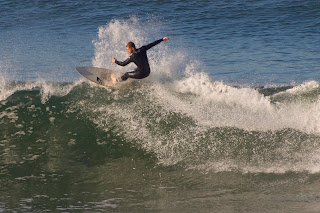 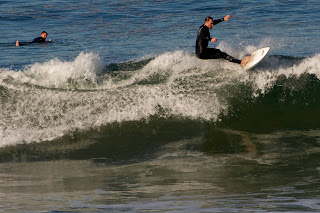 Northeast wind is up. This has put some texture on the water and frigidity in the air. Some long period NNW stuff out there today. Shoulder to head high with sneaker closeout sets 2 feet overhead. Fair shape. 15 out mostly lined up south of the reef. Timing the lulls makes the paddle out fairly painless but it doesn't take too many duck dives or turtles to get a brain freeze; water is COLD.

Lumpy, bumpy and big. Fair surface conditions, slight NNE breeze, head high+, fair to poor shape, 30+ out. Incoming high tide of 6.7 is already lapping the bluffs and pushing water up the ramp. Lots of refraction in the water, especially at the reef. Tres Palmas is double overhead; no one out there.

All in all, I'd go somewhere else today. Too much west in the swell and as Ian says "too much sickness on the water".

I love the light of a late afternoon surf session.  It's challenging to shoot in this type of light but when you get it right it just pops.  Even the washed out shots  convey the stoke.  The translucent green waves, the silvery surface, the sun glinting on the water, make for some spectacular situations and images you just can't get with front lit waves.

I took these this afternoon around 4:00 at 15th Street in Del Mar.  A minus tide was about to hit bottom and the swell was maxed out.  Still, there were more than a few people out in the line up trying to snag a corner here and there.  There were some barrels too.  Check it out.

Too much water. A 6.5 (6.5!) high tide has smothered whatever swell is out there this morning. Good surface conditions, no wind. 6 out. Waves are rolling through and dumping on the sand.
There is definitely some WNW energy out there; just have to wait till about 9:30 for the right tide. Looks like we are in for another incredible SoCal winter day. That's the way I like it!

It's Getting Near Dawn

And conditions are clean, clean, clean. Bigger than yesterday, chest to shoulder high with head high sets. A lot of west in it today so the sets are not as shapely as they could be but if you are in the right spot....oh mamma! Some screamin' sizzlin'
lefts. About 15 guys out; fairly well spread out. Got to time your paddle out or you will get munched for sure.

Here it comes! Still a fairly short period swell but there are some waist to maybe (maybe) chest high waves out there. Good conditions with a hint of offshore flow. With this tide, the waves are soft and backing off a bit but that should improve as the tide does. 10 guys out. This is a surf day!

Supposed to hit the mid 70's at the beach today so get out there!

Cielo azule con no wind and some very small short period wind swell lines pounding sand on the inside. More than yesterday for sure but still marginal overall. 9 guys out. Not much else to report.

This is the biggest thing here this morning.

It's a Beautiful Morning

No wind, no crowd and, you guessed it, no surf. Tide is on it's way out leaving some drained out knee to waist high shore smackers. The only ones in the water are the surf PE groms (who have been greatly annoying the past week or so, but that's a whole other story).
There is a huge raft of sea birds just north of the quarter mike marker off Tres Palmas; looks like they are having quite a feast out there. V shaped flocks of Cormorants are swarming everywhere.

For today: cold, calm and small. Very good conditions, not much in the way of waves. Knee to waist high sets, nothing in between. 9 guys out including Luke, who in the short time it has taken me to write this, caught 2 nice little lefts. Fair shape. Hey, wait a minute! Luke just snagged a chest high set wave. He was slotted; now he is swimming for his board. Nice ride Luke!

Me, I'm waiting for some sun before I head out.

Good conditions; shoulder to head high; offshore flow and crowded. 30 out and more arriving every second. Inconsistent but the sets are large; fair shape. Tide is right for it so get on down here! Join the fun. Cancel that meeting. Call in well. Add to the mass of humanity bobbing around in the line up.

I had a dentist appointment first thing this morning so I wasn't able to post the morning CSSR.  But I did drive by on my way to the dentist and it was very clean, about 5-6 feet, slight offshore flow with about 20 guys out.  Fair to good shape.  It was looking good!  Kurt was getting ready to head out as I was leaving.

That was all I could think about as I sat in the dentist chair for the next hour or so; I was developing a terminal case of surf angst!  And there is only one cure.  As soon as I got home I loaded up my board and took off for 15th street.  It was around 10:30 when I got there but the 6.2 high tide had dropped enough by that time so that the waves had some decent faces.  Still shoulder to head high and the wind was still good.  Still 20 guys out.

Had a great time but it wasn't the same without the Powerhouse crew in the water.  The rights were much better than the lefts and they had some zip and some juice.  So it worked out fine for me.  What about you all?  Did any of you make it out this morning?

BTW, I heard from Barb this morning.  She is going to have her neck/spinal surgery on the 26th with an 8-12 week recovery period after that.  Send some positive vibes and good thoughts her way; she hasn't been able to surf since mid October!  Barb,  all the the Powerhouse Surfing Association crew wishes you a successful operation and speedy recovery.  BTW, can we borrow your board since you aren't going to be using it for a while?

Here are more photos of the early days of the San Onofre Surfing Club in action.  Chuck asked me where I got them and what I wanted to say is that I bought an old camera at a garage sale and noticed that it still had some film in it.  So I had the film developed and voila, previously unknown, historically significant surf photos.  That would have been a great story, but the truth is that they are from the archives of Life magazine.