The Search IV - A Series of Flats Can Make a Curve 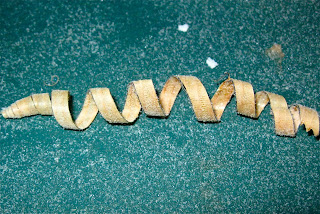 Shaper Robin Prodanovich made my day.  I met him at his shaping bay for the shaping session on my new South Coast board.  Robin has been shaping boards since 1968 and besides South Coast has shaped for Gordon & Smith, Linden, Rusty, Nector, Local Motion.  He also has his own line of surfboards, RP Surfboards. 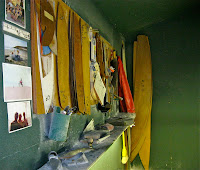 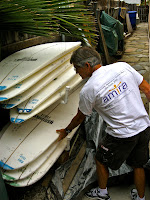 In all my 47 years of surfing (yes, I'm that old) I'd never watched a shaper do his magic.  So I asked Robin if I could hang out while he shaped my board and he said sure, come on over. He met me out front of his home and we walked back a narrow path to his workshop.  Located at the back of his home, his shaping bay is neat, organized and completely, totally coated with foam dust.  But that's to be expected; mowing foam is what he does.  Most everyday from 9am to 6pm. 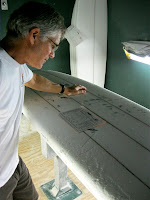 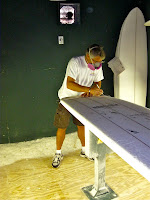 We spent about a half and hour getting acquainted before he dug my blank out from a stack next to his workshop.  A triple stringer US Blanks blank.  It was ugly.  Glue all over it, stringers sticking out the back and front ends.  It looked a lot like a soft top COSTCO board.  I kept thinking, "my board is in there?" 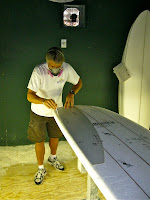 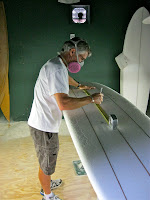 One last question from Robin, "how thick do you want it?" (I go for 3.25") and at 9:30am he's on his way.  First some measurements like length and width.  Next several curve templates emerge from the stacks near the wall.  Robin traces the curves defined by the templates on the blank, looks at the result from several different angles and goes back for some refinements and does that several times till he is satisfied with the lines and symmetry. 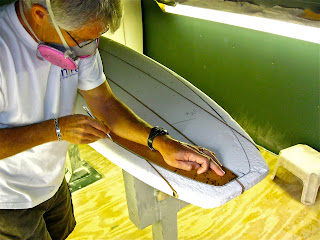 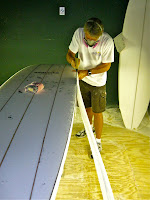 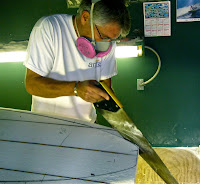 Now the first cut!  With a handsaw.  He used to use a sawzall but explained that the thinner blade had a tendency to wander during the rough cuts.  His handsaw has a wide blade which gives him a much straighter and flat cut.  He expertly cuts to the template lines on the blank and squares up the cuts with his surform. 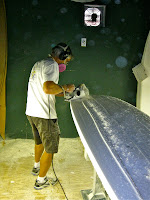 Now it's time for the Skil 100 power planer.  Face mask on?  Check.  Ear plugs in?  Check.  Here we go.  With his practiced eye and knowing hands, Robin deftly guides the plane up and down the length of the board with long, flowing, connected strokes.  First one half of the board then the other.  No wasted moves, no wasted energy.  There, the bottom of the board has taken on it's rough shape.  He flips it over and starts on the top.  Same fierce concentration, same fluid motion.  Totally in the moment.  Hey, this is starting to look like a surfboard!  And there is foam dust everywhere! 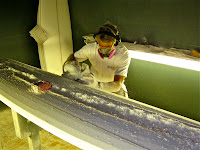 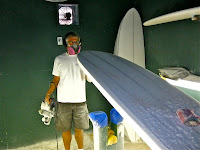 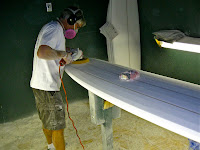 Next Robin uses his power sander
to further define the curves and starts to link up his "series of flats" carved into the blank by the power planner.  As Robin explains, he can't create curves during this initial run through.  What he can do is expertly create a series of flats that can be further worked with his sander, his surform, hand sanding and block planes into perfectly foiled rails, rail transitions, v's and concaves  It's pretty cool to watch how the flats begin to merge and curve right before your eyes. 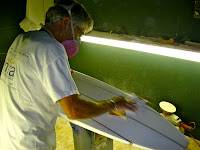 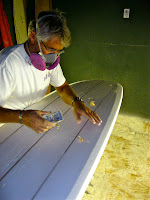 After the power sander Robin goes through a series of hand sanding steps utilizing different grits and sanding forms (hard block, soft foam block, no block) to further coax the shape into being.  Finally, an incredibly sharp plane is used to fine tune the curvature and profile of the three stringers.  He is just as interested in the aesthetics of the board as he is in the symmetry, edges and things that make a board work in a wave. 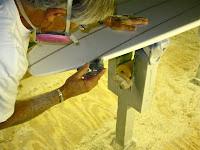 Around noon Robin flips the board bottom side up and writes the board's vital stats on either side of the center stringer and we're done.  2 1/2 hours from ugly blank to a thing of beauty and grace.  The board will now go to Mark and Nikki's Custom Surf and Sail glassing shop for the fin boxes and the glassing.  About 2-3 more weeks and this board will be in the line up at 15th street!  Give me room! 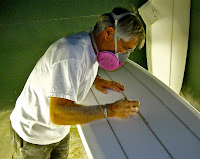 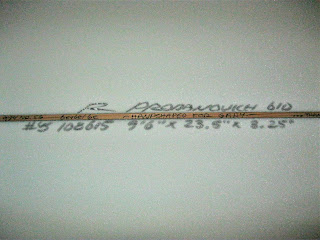 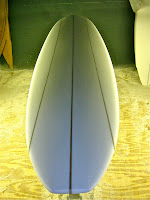 Here is a short video of Robin creating the nose concave with the power planner.
t.
Posted by Gary at 4:14 PM